The Resident Coordinator in Zambia

On May 8, United Nations Secretary-General António Guterres appointed Beatrice Mutali of Kenya and the United Kingdom as the United Nations Resident Coordinator in Zambia, with the approval of the host government.

Ms. Beatrice Mutali brings more than 25 years of private and public sector experience within the area of sexual and reproductive health and rights, covering Middle- and Low-Income countries, and a combination of development and humanitarian contexts.

Prior to her appointment as UN Resident Coordinator, she served as United Nations Population Fund (UNFPA) Deputy Regional Director for East and Southern Africa, UNFPA’s Representative to South Africa and Country Director for Botswana and Eswatini, and UNFPA’s Deputy Regional Director for West and Central Africa. In all these positions, she has led successful strategy development and implementation, policy engagement, resource mobilization, programme management, and has built strong partnerships.

Prior to joining the UN system in 2014, Ms. Mutali held several leadership roles within the area of Family Planning, HIV/AIDS and Sexual and Reproductive Health from organizations such as Merck/MSD, the International HIV/AIDS Alliance, the International Planned Parenthood Federation and Planned Parenthood Federation of America. 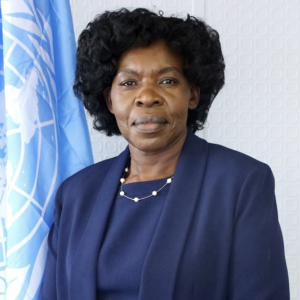